For nearly 150 years Gibbs theory has been used extensively in predicting the equilibrium shape during crystal growth. However, recent research on platinum (Pt) nanocrystal growth has proven that this classical crystal growth theory breaks down at the nanoscale.  The research article is published in the August 22 issue of Science (Vol. 345 no. 6199 pp. 916-919 DOI: 10.1126/science.1253149).

“For years, predictions of the equilibrium shape of a nanocrystal have been based on the surface energy minimization proposal by Josiah Willard Gibbs in the 1870s to describe the equilibrium shape of a water droplet,” says Dr. Zheng, “For nanocrystals, the idea is that during crystal growth, high-energy facets will grow at a higher rate than low-energy facets and eventually disappear, resulting in a nanocrystal whose shape is configured to minimize surface energy.”

Contrary to the prediction by Gibbs theory it was found that the three lower index facets {100}, {110}, and {111} initially grow at similar rate until the {100} facets first ceased the growth.  The {110} and {111} facets continue to grow until the {110} facet reaches its limit as defined by the two neighboring {100} facets.  This leaves {111} to grow to fill the corners completing the shape of a perfect cube, when the growth completely stops.  The low ligand mobility on {100} facet is believed to be responsible for its ceased growth. 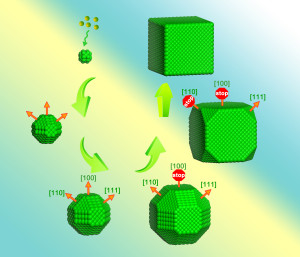 This rapid atomic growth process was captured for the first time by the high speed Gatan K2 IS direct detection camera with a time resolution of 2.5 ms at 400 frames per second (fps). The K2 IS camera can also be configured to acquire images at a time resolution of 0.625 ms (1600 fps).

“K2 direct detection capabilities are enabling new investigations across a range of materials applications,” said Cory Czarnik, Product Manager for imaging products at Gatan and also a co-author.  “We expect that many more scientific discoveries will be made with the K2 direct detection cameras in both low dose, beam sensitive materials as well as applications with high frame rates including 4D STEM.”

The K2 IS direct detection camera is optimized for both single particle structural biology and cryo-tomography, as well as high-speed dynamic and in-situ electron microscopy (EM). The uniquely back-thinned sensor is the most radiation-hardened sensor available today, with a lifetime greater than 5 billion electrons per pixel.