Cathodoluminescence from insulators, metals, and plasmonics

There is significant interest in understanding and controlling optical and electronic properties of materials at the nanoscale. There is much basic science of the interaction of light and matter that is not understood well but also a wide range of commercially important devices such as LEDs, photovoltaic cells and chemical sensors that already rely on materials with physical dimensions of only a few nanometres. Luminescence techniques are ideal tools to study the optical and electronic properties however until recently were unable to provide information at a spatial resolution commensurate with the physical size of many critical device features.

Luminescence techniques are based on the analysis of low energy photons (light) emitted from a sample after it has been excited by an energy source; the emitted photons are typically in the near infrared, visible or ultraviolet (0.5 – 6 eV or 200 – 2500 nm). The excitation energy can be from a laser (photoluminescence—PL), electrical current (electroluminescence—EL) or electrons (cathodoluminescence—CL). Cathodoluminescence is advantageous in that the excitation source can be focussed to a probe less than 1 nm in diameter in an electron microscope potentially giving luminescence information with a spatial resolution orders of magnitude higher than with other luminescence techniques, furthermore, with use of other analytical techniques in the electron microscope the luminescence information may be correlated with size, morphology, composition, chemistry and microstructure.

Cathodoluminescence microscopy has been used successfully as an investigative technique in fields including optoelectronic materials, photovoltaics, geology, oil and gas reservoir analysis, plasmonics (optical properties of metals), pharmaceutical development and cell biology. The cathodoluminescence technique has been used extensively in the scanning electron microscope (SEM) to study bulk specimens and nanoparticles. However the spatial resolution of the technique has been limited to approximately 20 nm (in the very best case) and has not allowed correlation with microstructure. It has been known for some time that performing cathodoluminescence microscopy in the transmission electron microscope (TEM) is advantageous in these respects.

A small number of homebuilt and commercially supplied TEM-CL systems have been installed in recent years. The cathodoluminescence signal level is low from many samples and efficient collection and detection is necessary. In order to collect photons from a large solid angle typically, these systems utilised a small parabolic mirror positioned between the sample and the upper or lower pole piece of the TEM to guide light emitted from a sample to external analysis and detection hardware. Of these systems, the best solid angle of collection is approximately 3 steradian, collecting 25% of the light emitted from a specimen. However, in these systems even the smallest mirror design has necessitated the use of very wide pole pieces, with gaps in the range of 7 – 20 mm commonly employed. This has severely limited the range of TEMs that can be adapted to collect cathodoluminescence and of those that are compatible the performance of the TEM is compromised by selection of a wide pole piece.

The Vulcan cathodoluminescence detector utilizes a novel approach to light collection (patent pending) enabling most analytical (S)TEM instruments to be utilised for cathodoluminescence investigations without compromise, finally bringing the power of cathodoluminescence analysis to mainstream analytical microscopes. Miniature mirrors above and below the specimen are used providing a solid angle of collection up to 7.2 steradian enabling up to 60% of light emitted by the specimen to be collected. The mirrors are integrated into the tip of a cryogenic (liquid-nitrogen) TEM holder and highly efficient collection has been demonstrated in instruments with pole piece gaps as small as 4.5 mm. A schematic representation of the holder tip is shown in cross section in Figure 1a. Collection mirrors (shown in purple) can be seen above and below a standard 3.05 mm specimen. The mirrors contain small apertures to allow the primary electron beam to reach (and excite) the specimen and to allow the transmitted electrons to travel down the column unimpeded for normal TEM/STEM analysis. Photons emitted from the specimen are focussed into optical fibres located to one side of the specimen boat, with light reflected from each mirror coupled into separate optical fibres. The optical fibres run along the length of the holder to fibre connectors at the rear of the holder, Figure 1b. Light is coupled to remote analysis hardware providing spectroscopic analysis with energy resolution 0.3 meV, STEM-CL imaging (total light and energy filtered) and spectrum-imaging using DigiScan™ II system. 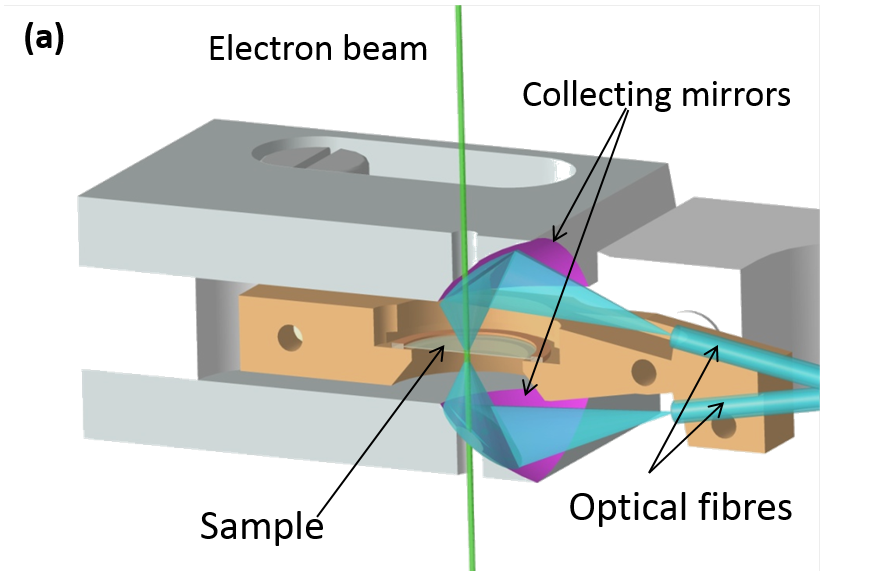 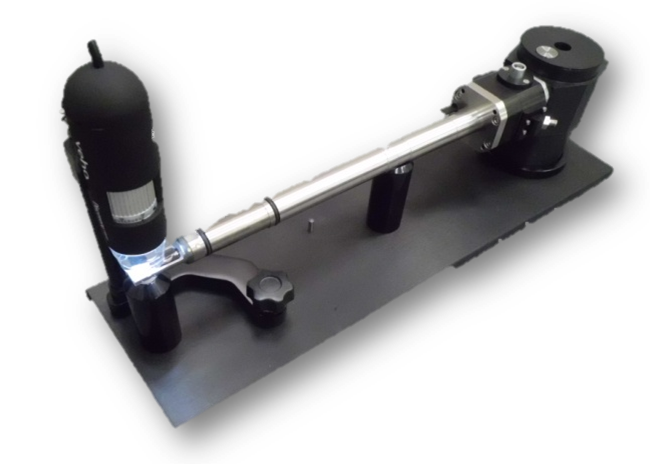 Cathodoluminescence in the (S)TEM

In an electron microscope, energy from a high energy (fast) electron is transferred to a specimen placing the specimen in an excited state. When the sample relaxes to the ground state by releasing a low energy photon, we term the emitted photon cathodoluminescence. The physical process may sound similar to X-ray fluorescence (EDS), and in many ways is, however X-ray photons are associated with high energy core shell electronic transitions giving an elemental fingerprint whereas the low energy photon of cathodoluminescence is usually (but not always) associated with energy transitions that occur within or between free electron and valence band energy states. Therefore cathodoluminescence provides information on low energy (0.5 – 6 eV) phenomena such as band gap (composition), chemical bonding, electronic structure (excitonic, donor, acceptor and deep levels), surface plasmons, stress and much more.

Correlation of cathodoluminescence with (low-loss) electron energy loss spectroscopy (EELS) can give a full understanding of the electronic processes occurring within a specimen; EELS provides information about the energy transfer from the electron beam to a specimen (excitation) whereas cathodoluminescence is from the relaxation (de-excitation). However cathodoluminescence results are not dependent upon the energy of the primary electron beam and so low energy phenomena can be studied in TEMs with wide distribution in the primary electron energies (where the zero-loss peak obscures low-loss EELS information). Furthermore, cathodoluminescence can reveal processes that occur whilst the specimen is in the excited state. For example, in semiconductors the excitation process generates electron-hole pairs which are free to move. Electron-hole pairs which are captured by defects and do not release a photon are deleterious to the performance of many devices, cathodoluminescence enables defects which degrade device performance to be identified. 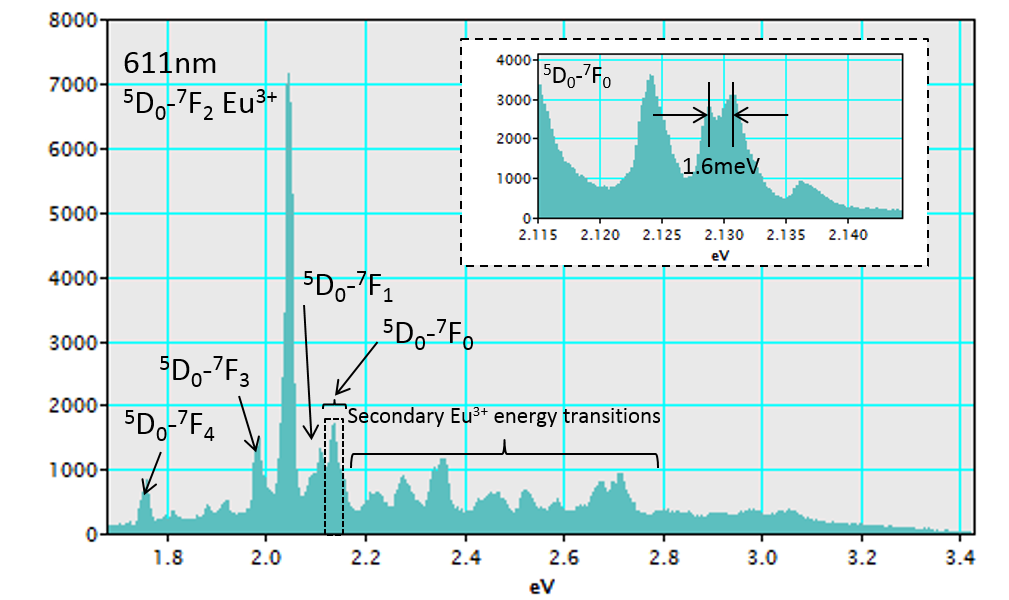 Nanostructured metals exhibit interesting size- and morphology-dependent optical properties due to changes in resonant surface plasmon modes (quantized oscillations of the sea of free electrons). The rapidly growing field of plasmonics artificially structures metals at the nanoscale to control surface plasmons, applications include chemical and bio-sensing and enhancement of light absorption and extraction in photovoltaic and LED devices, respectively.

The optical effects of plasmon resonance are at a length scale below the diffraction limit of optical experiments meaning that alternative techniques are needed to study individual nanostructures. A focussed electron beam of an SEM or (S)TEM can also be used to generate local surface plasmon resonance (LSPR) modes. Electron energy loss spectroscopy (EELS) and/or cathodoluminescence signals in the TEM can be used to visualize and understand the LSPR modes with suitable spatial resolution. Cathodoluminescence in particular is advantageous as this reveals resonance modes that interact with light (‘bright’ modes) whereas EELS reveals both ‘bright’ and ‘dark’ LSPR modes (dark modes refers to LSPR modes that result from interaction with electrons and not photons).

Cathodoluminescence, in both the SEM and TEM has been utilised to image LSPR modes of particles and antennas of various shapes. For example, Figure 3 shows luminescence patterns of gold prisms acquired by (S)TEM-CL. Gold prisms of different size reveal very different LSPR patterns; a gold prism with sides of 250 nm shows strong emission at 1.80 eV (660 nm) at the three corners (Figure 3c) whereas an 800 nm particle shows luminescence dominated by a strong central LSPR node (1.53 eV, 803 nm) with other lower intensity LSPR modes along the edges (1.43 and 1.70 eV, 870 and 705 nm). 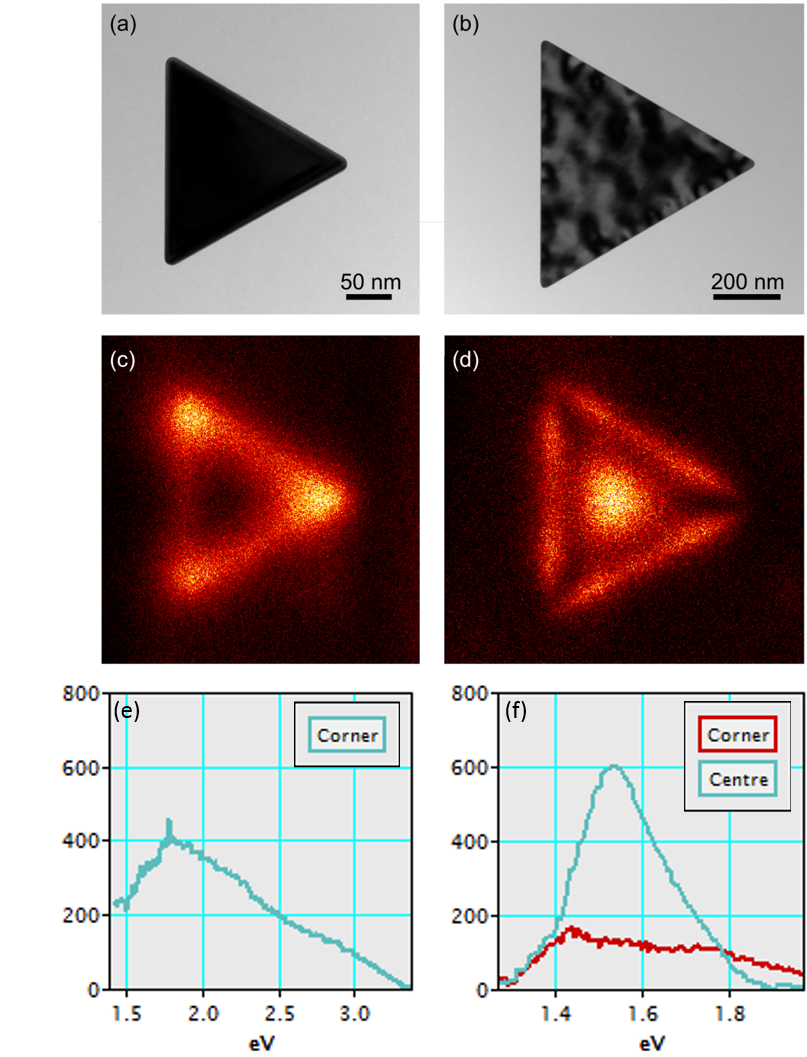 Nitride semiconductors (AlxInyGa1-x-yN) are of particular interest as they form the basis for the current and (probable next) generation of commercial LEDs. The quantum efficiency of light emission is high and the selection of composition and quantum well (QW) structure enable the light emission wavelength to be tuned from the ultraviolet, through visible to near infrared wavelengths (210 – 2200 nm). However, the price per unit remains high primarily due to the cost of the sapphire substrate used in most commercial products. Nevertheless, there have been recent advances allowing GaN with high quality to be grown on relatively cheap silicon substrates.

Figure 4 shows a STEM-CL investigation of a commercially available blue emitting GaN-on-silicon LED prepared in cross-section using PIPS system. The active, light emitting, structure is a set of six 3 nm thick InGaN quantum wells grown on a thick (~2 µm) (Al)GaN layer. The sample contains a high dislocation density (>108 cm-2) with a significant number of threading dislocations extending through the active QW region (indicated by black arrows in the dark field image, Figure 4a). Using STEM-CL, variation in the luminescence intensity by more than 20 times is observed within the QW region (Figure 4b); no other luminescence technique (even SEM-based cathodoluminescence) would have sufficient spatial resolution to reveal this variation. For the first time, the impact of individual threading dislocations on the QW emission can be observed. Some dislocations quench luminescence locally (red arrows in Figure 4c and 4e) whilst remarkably others appear to enhance light emission (green arrows in Figure 4c and 4e). In addition, dislocations which act to enhance luminescence induce a blue-shift of 25 meV (5 nm) in the QW emission wavelength. Further work is required to determine the mechanism of dislocation interaction with QWs however this initial STEM-CL work demonstrates the importance of correlating microstructure with the nanoscale luminescence properties. 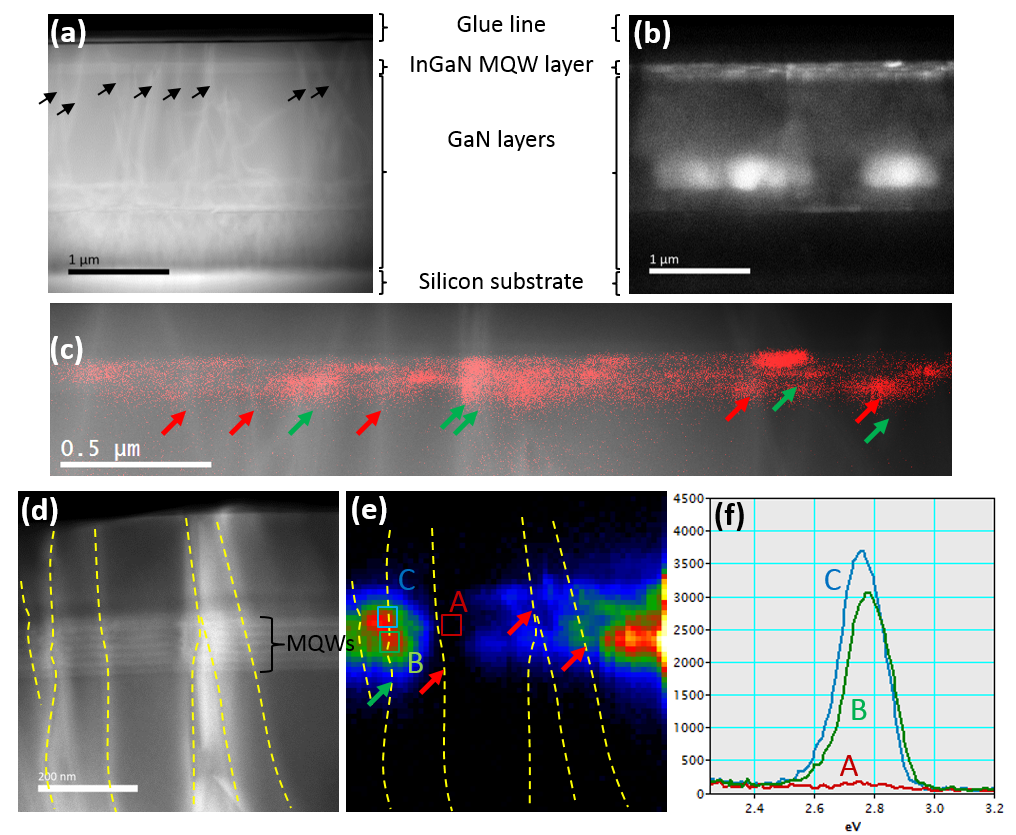 Cathodoluminescence microscopy in the (S)TEM is a unique tool enabling optical and electronic properties of materials to be correlated with morphology, microstructure, composition, and chemistry at the nanoscale.