Over the past few years, with the advancements in aberration-corrected transmission electron microscopy, the spatial resolution in scanning transmission electron microscopy (STEM) has been enormously improved. Such improvements that are the results of the reduction of the probe size and the dramatic increase of the probe current lead to the capability of acquiring high resolution elemental and chemical maps using electron energy loss spectroscopy (EELS). Atomic level EELS maps can now be easily acquired and their acquisition time is to a large part related to the speed of the EELS spectrometer. The introduction of fast EELS spectrometers such as the GIF Quantum® system has dramatically improved the information that can be obtained from an EELS spectrum imaging (SI) dataset. Now, EELS maps can be acquired at over 1,000 spectra per second which allows full advantage of the increased probe current available in an aberration probe corrected microscope to be realized. In addition the lens system present in the GIF Quantum system, with the capability to correct the aberration up to the 5th order, leads to the ability of using high collection angles allowing more signal to enter the spectrometer while maintaining the energy resolution.

To illustrate these advances, data was acquired at Arizona State University using a probe corrected JEOL ARM 200 equipped with a Schottky FEG source operating at 200 kV. The EELS spectrometer used was a GIF Quantum ER spectrometer, including: DualEELS™ capability that allows two different energy regions of the EELS signal to be recorded simultaneously under the same experimental conditions; a 2k CCD camera that allows recording EELS data with an energy range that extends up to 2000 eV (4000 eV with DualEELS); fast acquisition mode that allows acquisition of over 1,000 spectra per second; a 5th order aberration lens system corrected allowing large (>100 mrad) collection angles to be used with sub eV energy resolution. 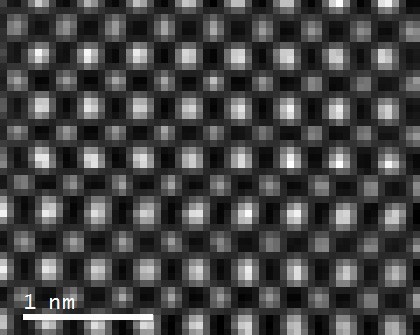 The sample used was a conventional SrTiO3 (STO) single crystal and the EELS data was acquired in STEM mode using a probe size of 0.13 nm containing over 117 pA of current. The probe convergence angle was 25 mrad and the collection angle was over 110 mrad. The actual collection angle was not directly measured but estimated based on the microscope camera length and EELS spectrometer entrance aperture used for the experiment. EELS SI analysis was carried out in DualEELS mode and the regions of the EELS spectrum from 350 – 2400 eV and 1000 – 3048 eV were simultaneously acquired using acquisition times of 4 ms and 11 ms, respectively. Therefore, the total acquisition time per each pixel was less than 16 ms with better than 94% live time. The EELS SI were acquired without any spatial drift correction. The total acquisition for the whole 50 x 50 pixel dataset was 75 s. During the SI acquisition, the sample experienced a minor amount of drift as evidenced by the simultaneously acquired annular dark field (ADF) analog image shown in Figure 1.

Most work on atomic level EELS mapping of STO has been carried out using the Sr M4,5-edges at 133 eV and the Ti L2,3-edges at 456 eV. While low energy M-edges such as the Sr M4,5-edges have large cross-sections for energy loss events, the delayed nature of the M-edge results in poor signal-to-background ratios (SBR). As reported in (Botton GA et al. 2010) the contrast in the Sr M4,5-edges map increases progressively as the integration window is shifted away from the actual edge threshold. The best contrast was achieved placing the integration window from 360 to 410 eV beyond the Sr M4,5-edges onset. The contrast is improved by both the increase in the edge cross-section and the reduction in the background signal giving an overall increase in the SBR and signal-to-noise ratios (SNR). However, the delayed window placement may lead to misinterpretations due to the presence of extra spectral features such as carbon contamination with its K-edge at 284 eV and other possible elements edges in that region of the EELS spectrum. This problem can be easily overcome by mapping the Sr L2,3-edges at 1940 eV and using an integration windows of 100 – 200 eV from the edge threshold. Here the SBR is dramatically improved and the background is a nearly constant power law at these energies leading to a more reliable background removal. Owing to the increased probe current available in a probe corrected STEM microscope, such an edge can be acquired with an acquisition time as low as 11 ms while maintaining a good SNR. Mapping simultaneously the Ti L2,3-edges and the Sr L2,3-edges at 456 eV and 1940 eV respectively can be easily achieved in DualEELS mode which is available in the GIF Quantum EELS spectrometers. Figure 2a shows the EELS spectrum extracted after splicing the two datasets at low and high energy.

Another problem that can be encountered when doing atomic level EELS maps is the background removal. In general the background for core-loss edges is removed using the power law fitting, which is available in DigitalMicrograph® software. Here the intensity of the background I is given by: I=AE-r where E is the energy loss, A and r fitting constants which depend on the details of the experiment. At high energy losses (>~900 eV), r is relatively constant taking a value between 2 – 3 while at low energies, r may change with energy loss making the extrapolation problematic. Extracting the background using the power law method can lead to errors in the maps directly related to extrapolation errors in the fitting. However as reported in (Riegler K et al. 2010; Leapman RD et al. 1991; Verbeek J et al. 2004 and others) the background removal can be largely improved using the MLLS fitting approach of the extracted background and the edge signal with the actual EELS SI dataset. Here the reference spectra needed for the fitting are the extracted background and edge after background removal. In this way the background is forced to retain a constant shape across the whole region. The SNR of the extracted elemental maps are largely improved as shown in Figures 3a, b and 4a, b. Such improvement can be observed in Figures 5a and 5b which show line profiles extracted from the same regions in the Ti and Sr elemental maps with the background removed using conventional Power Law method and the MLLS fitting procedure. The line profiles were extracted from regions in between the atomic columns to show how the background modulates. All the line profiles are normalized to the same maximum. The background fluctuates much less in the case of the MLLS fitting approach. The improvement is more evident in the case of the Ti L2,3-edges elemental map where standard background fitting is more problematic; as mentioned previously, the background fitting at high energy edges is more robust and not improved as much by MLLS fitting.

In addition to elemental contrast shown in the presented maps (Figure 6), the L2,3-edges of Sr and Ti carry significant bonding information due to strong coupling to the local density of states of the d-band electrons. Using MLLS fitting of the near-edge fine structure can give profound information on the chemical state of the element under the beam. This will be the topic of a future publication.

Same approach was used to characterize the interface between layers of SrTiO3 and LaMnO3. The TEM specimen was prepared by conventional cross-sectioning involving, as final stage, ion milling using a Gatan PIPS II system. The TEM cross-section was provided by Professor David Smith at Arizona State University and the EELS SI was recorded using the same instrumentation described above with a probe size of 0.15 nm containing almost 300 pA of current at a probe convergence angle of 29 mrad and directed into the spectrometer with a collection angle of over 110 mrad. Once again the EELS SI data was taken in DualEELS mode and the regions of the EELS spectrum from 280 eV to 2328 eV and 900 eV to 2948 eV were simultaneously acquired using acquisition times of 4 ms and 14 ms respectively. Therefore, the total acquisition time per each pixel was less than 20 ms with better than 94% live time. The EELS SI were acquired without any spatial drift correction since the microscope was particularly stable as shown in the simultaneously acquired ADF analog image in Figure 7. Over 34,000 spectra (208 x 82 x 2 spectra) were acquired in just about 10 min with a spectral rate of over 50 spectra per second and this shows how atomic EELS information can be extracted from high energy edges, such as the Sr L2,3-edges at 1940 eV, in a very short time.

Figure 8a shows the EELS SI obtained by splicing the two datasets from the low and high core-loss acquisitions. The region in the red box is where the EELS spectrum shown in Figure 8b is extracted. Since the EELS spectra are averaged across a region in the EELS SI which extends from the SrTiO3 on left hand side to the LaMnO3 on the right hand side, the EELS spectrum shows the Ti L2,3-edges at 456 eV, the O K-edge at 532 eV, the Mn L2,3-edges at 640 eV, the La M4,5-edges at 832 eV and the Sr L2,3-edges at 1940 eV together. After splicing, the resultant EELS SI extend from 280 eV to 2948 eV. From each edge, the background was removed using the MLLS procedure used for the SrTiO3 experiment described above and the resultant elemental maps are shown in Figures 9a, b, c, d. 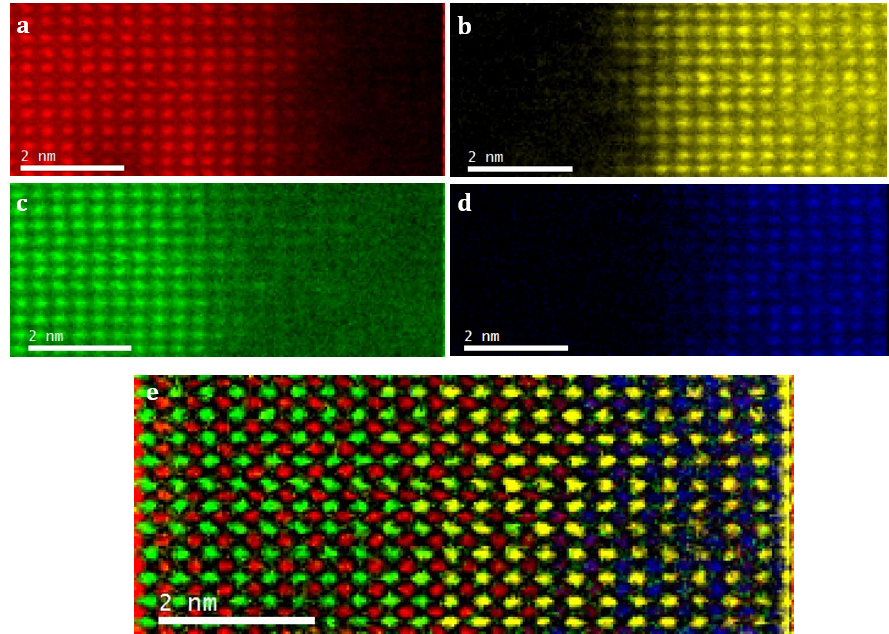 The colorized map in Figure 9e shows a strong contrast among the Ti, Mn, La and Sr atoms. The elemental distribution at the interface is now revealed. Even though the interface appears to be abrupt in the STEM image, the chemical analysis carried out using EELS SI with the GIF Quantum spectrometer shows some elemental intermixing between Mn and Ti and between Sr and La. This extends for a couple of monolayers.

Concluding this application note, we have shown that atomic EELS mapping is very effective using high energy edges. The SBR is much higher leading to a more reliable edge extraction. In addition the background removal can be enormously improved using MLLS fitting routine procedure. High and low energy edges in the EELS spectrum can be easily and simultaneously acquired using the DualEELS capability available in the GIF Quantum spectrometer and more importantly by combining the increased probe current present in an aberration corrected microscope with the fast EELS spectra acquisition capability available in the GIF Quantum, mapping high energy edges at the atomic level with a good SNR and in a short amount time it is now possible. The quality of such elemental maps in terms of contrast is very high as shown in the Ti and Sr elemental maps in one case and Sr, Ti, La and Mn for the other experiment.

We would like to acknowledge Dr. Toshiro Aoki of JEOL for his expert assistance in configuring the microscope for both experiments.