Observe biological specimens in their native environment at cryo-temperatures.

The Royal Swedish Academy of Sciences has decided to award Jacques Dubochet, Joachim Frank and Richard Henderson the Nobel Prize for Chemistry 2017 for "developing cryo-electron microscopy for the high-resolution structure determination of biomolecules in solution".  Scientific Background on the Nobel Prize in Chemistry 2017: The Development of Cryo-Electron Microscopy

Cryo-EM is being led by the technology and innovation behind Gatan's direct detection cameras (K3™ and K2®).

The efficient frontier of resolution     Advantages     Workflow for cryo-EM

What is single-particle cryo-EM? 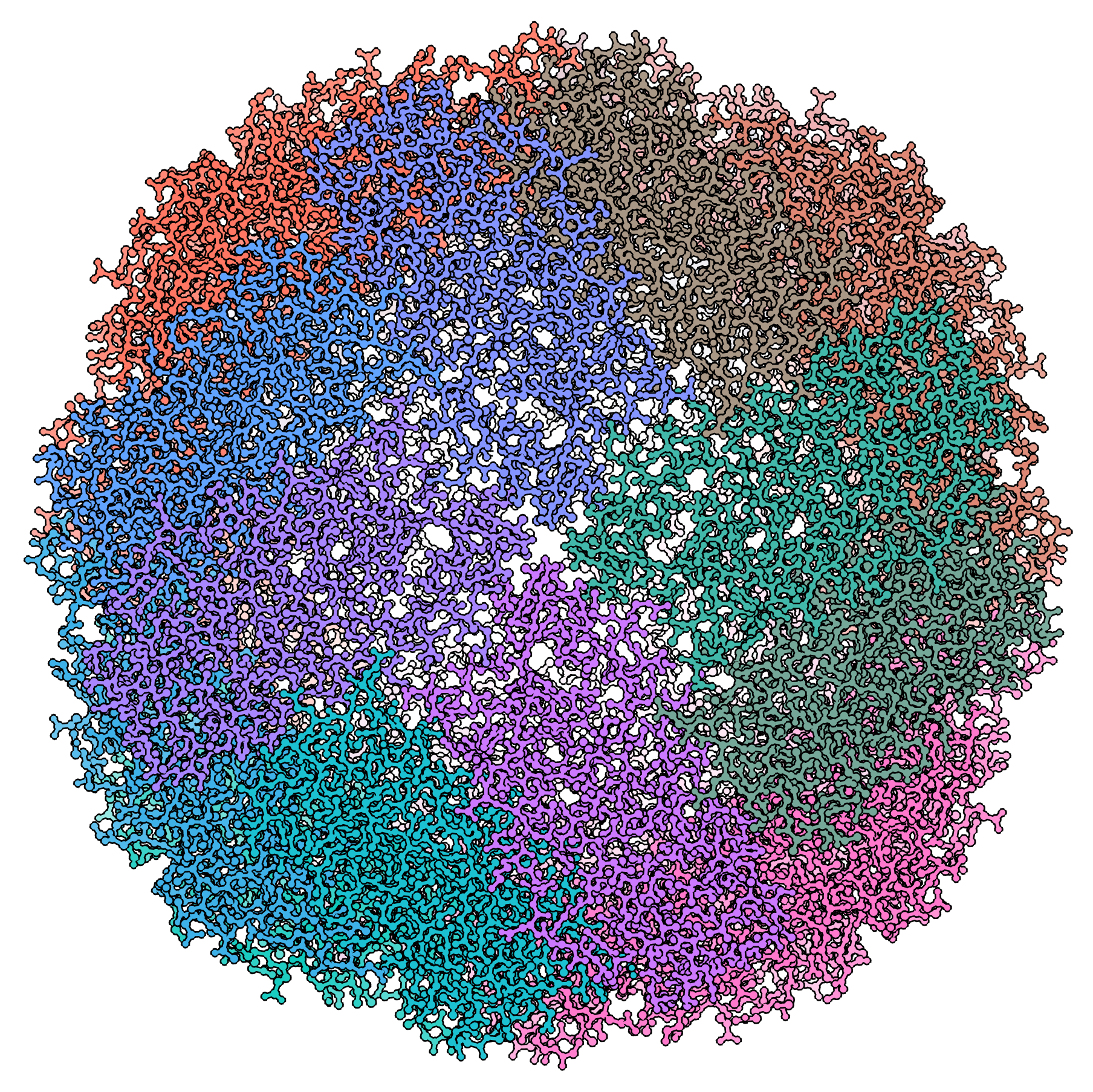 Single-particle cryo-electron microscopy (cryo-EM), is an increasingly popular technique used by structural biologists to solve structures at atomic resolution. This technique complements x-ray crystallography because it reveals structural details without the need for a crystalline specimen. Through the examination of a frozen-hydrated specimen in vitreous (non-crystalline) ice, the specimen ultrastructure, buffer composition and ligand distribution from its native state are maintained. Cryo-EM also complements structural studies using nuclear magnetic resonance (NMR) in that it enables the study of specimens larger than 90 kDa. Structural biologists frequently use cryo-EM to study viruses, small organelles, and macromolecular biological complexes, purified proteins as well as molecular interactions in supramolecular assemblies or machines.

During single-particle cryo-EM, a transmission electron microscope (TEM) is used to record high-resolution images of thousands to hundreds of thousands identical, but randomly oriented, particles (molecules) from each specimen. These images are then grouped, aligned, and averaged with image classification algorithms to distinguish between multiple orientations of the 3D molecule. With a well-behaved sample, cryo-EM can solve molecular structures with a resolution below 1.5 Å; a resolution level that was inconceivable only a few years ago.

This rapid improvement of cryo-EM resolution has been called the “resolution revolution” and is the direct result of direct detection cameras. Conventional cameras for electron microscopy use a scintillator to convert the electron image to a light image, and a fiber optic face plate to transfer the image to a CCD or CMOS image sensor for analog recording. When the results are converted and recorded, there is a loss of high-resolution detail that has long held cryo-EM from achieving its true potential.

The efficient frontier of resolution

Gatan's direct detection camera, often in combination with the GIF Quantum LS imaging filter, continues to yield breakthrough results that define the efficient frontier of resolution. Cutting edge publications show these products along with improved data acquisition and image processing strategies remain at the forefront of higher resolution reconstructions for smaller molecules, such as the 2.2 Å structure of β-galactosidase. 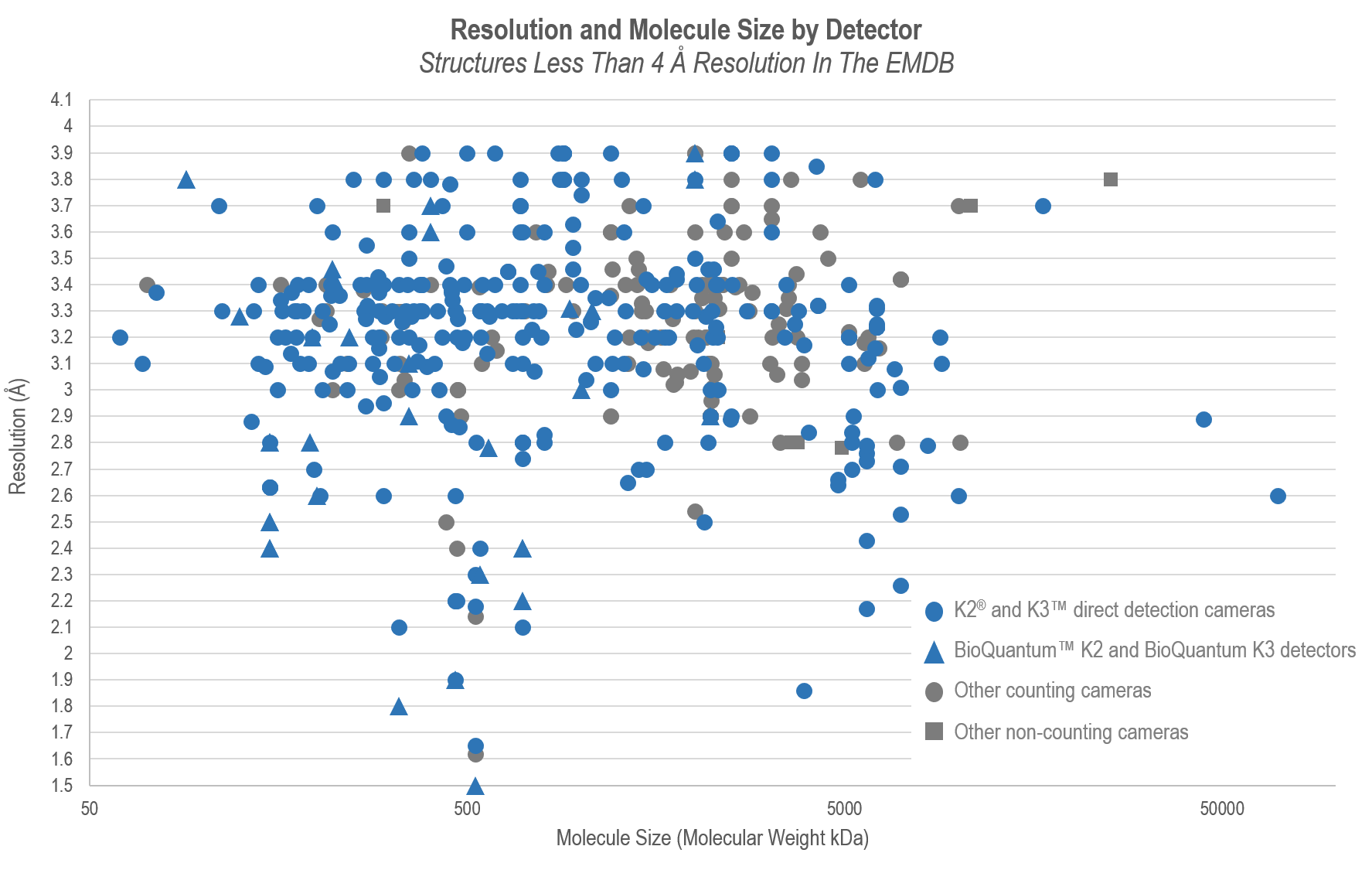 The graph above is a comparison between the resolution and molecule size for published single-particle cryo-EM structures. Gatan's direct detectors have been employed in all the structures which define the high-resolution frontier across a range of molecular sizes.

Now that single-particle cryo-EM provides structures with comparable resolution to x-ray crystallography, there are a number of unique advantages that are helping the technique gain traction amongst structural biologists:

The next generation cryo-holder for your high-resolution cryo-EM and tomography experiments.

The next-generation plasma tool to remove hydrocarbon contamination from TEM and SEM samples and holders.

Drive your digital cameras and surrounding components to support key applications including tomography, in-situ, spectrum and diffraction imaging, plus more.

Stage and optics control so you can seamlessly stitch images together.

Facilitate your HREM assays by automatically adjusting the critical imaging parameters of a TEM microscope focus, stigmation, and beam tilt.

Optimized for cryo-EM and cryo-ET to gain further insight into system function and disease progression at the molecular level.

eBIC for Industry is a recently inaugurated center offering professional cryo-EM services to the global pharmaceutical and biotech industry.

Molecular architecture of the SARS-CoV-2 virus

CryoEM at IUCrJ: A new era

2.2 Å resolution cryo-EM structure of β-galactosidase in complex with a cell-permeant inhibitor

Structure of the TRPV1 ion channel determined by electron cryo-microscopy

Structure, function and antigenicity of the SARS-CoV-2 spike glycoprotein

A 3.8 Å resolution cryo-EM structure of a small protein bound to an imaging scaffold

Refinement and analysis of the mature Zika virus cryo-EM structure at 3.1 Å resolution

Cryo-EM structure of 5-HT3A receptor in its resting conformation

The field that came in from the cold

How good can cryo-EM become?

Dynamical features of the plasmodium falciparum ribosome during translation

Structure of a yeast spliceosome at 3.6-angstrom resolution

An atomic structure of human c-secretase

Electron cryomicroscopy observation of rotational states in a eukaryotic V-ATPase

Mechanistic insights into the recycling machine of the SNARE complex

A molecular census of 26S proteasomes in intact neurons

Visualization of ATP synthase dimers in mitochondria by electron cryo-tomography

Structure of β-galactosidase at 3.2-Å resolution obtained by cryo-electron microscopy

Proceedings of the National Acadamy of Sciences

Journal of Analytical Science and Technology

Polyphosphate storage during sporulation in the gram-negative bacterium acetonema iongum

Compression deformation of single-crystal Pt3Al with the L12 structure