A geological specimen can contain a multitude of historical information about the region from which they are produced. This historical information often predates the history of humanity and the planet Earth, as in meteorites. Around 4.5B years ago, the solar nebula's accretion disc formed the rocky planets, meteors, and asteroids. Grains of corundum and minerals with calcium-aluminum inclusions (CAIs) were among the earliest solids to form. Analyses of these meteorites can yield valuable information about the early solar system and should be investigated thoroughly.

Energy dispersive spectroscopy (EDS) in the scanning electron microscope (SEM) is a crucial technique in analytical sciences used to determine the elemental composition of a sample with microscopic spatial resolution. The EDS technique for geological analysis is ideal as it enables mineral distribution to be determined based on the energy distribution of the characteristic X-rays emitted from a sample. However, the detection limit is typically ~0.1 wt%, meaning that the technique is insensitive to trace elements and cannot reveal many characteristics of mineral formation and alteration. Cathodoluminescence (CL) is often used to reveal trace element chemistry. CL spectroscopy analyzes the light emitted from a specimen at ultraviolet, visible, and infrared wavelengths. Many trace elements (and crystal defects) produce light emissions at these wavelengths, such that spectroscopic analysis permits their presence and distribution to be revealed down to parts per million level (0.00001 wt%).

Despite the apparent complementary nature of the EDS and CL signals, their simultaneous detection is often precluded in electron microscopy due to hardware incompatibilities. Here we present a methodology for the simultaneous capture of EDS and CL spectroscopy data. This method is demonstrated on a chondritic meteorite discovered in Antarctica – Miller region 090010 – containing CAIs, revealing grain boundaries in corundum and the distributions of trace elements Fe and Sm. 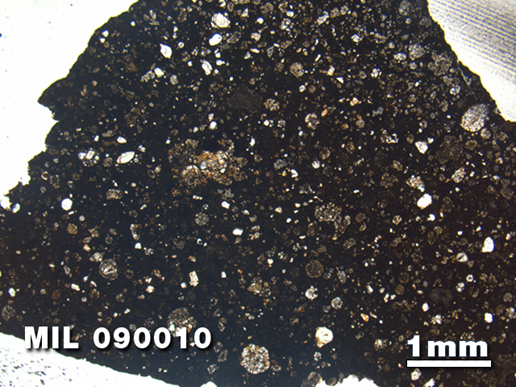 The specimen analyzed in this study was a chondritic meteorite discovered in Antarctica, which contained CAIs. The sample was prepared as a thin section, and a 3.0 nm thick carbon coating was deposited, via the PECS™ II system, to eliminate charging.

CL spectra were captured using a Monarc® Pro system and EDS spectra were collected with an Octane Elite detector (EDAX) attached to an FE-SEM, Figure 2.

The CL and EDS techniques utilize a working distance of approximately 10 mm beneath the SEM pole piece, but the collection mirror employed in spectroscopic CL detectors prevents emitted x-rays from reaching an EDS detector because the line of sight is blocked. However, the "EDS collection mirror" option of the Monarc systems was used, making simultaneous and efficient capture of CL and EDS signals possible. The EDS and CL signals were captured simultaneously using DigitalMicrograph® software, allowing for perfect pixel correlation between the EDS and CL maps.

The specimen was scanned using an SEM with an acceleration voltage of 10 kV across a 130 μm x 130 μm square region consisting of 375 x 375 pixels. The EDS data was captured from 0 – 10 keV with 2048 channels each at a bandwidth of ~5 eV. The CL spectroscopic data revealed the emission as a function of wavelength in 670 wavelength segments from 367 – 783 nm (spectral resolution ~0.62 nm).

The elemental quantification from EDS was combined with CL spectroscopy to identify the minerals being observed at the same spatial coordinates. In addition to Mg, Ca, and Al, the EDS spectrum image detected other elements, some in high abundances like O and Si, and others which were less abundant, including Fe, C, Ti, and Na.

Meanwhile, the CL spectral data revealed the presence of spinel (MgAl2O4) with Cr3+ characteristic peaks at 680, 691, 704, 713, and 723 nm (see spectrum 3 in Figure 4). The concentration of Cr3+ was too low for EDS to detect; however, the CL emission spectrum carries a significant signature of Cr3+ in spinel.

Furthermore, intra-material grain boundaries were observed in the corundum at 580 nm (see arrowed positions in Figure 5).

The size of the grains can yield information regarding the conditions during crystal formation, such as the rate of cooling and temperature. 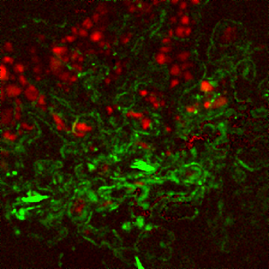 CL emission peaks for trace elements were observed in the spectrum for corundum at 460 nm corresponding to Fe3+[2] and at 603 nm in apatite corresponding to Sm3+[3]. Trace element maps were generated by observing the difference of the peak intensities at 460 nm and 603 nm against the surrounding spectral intensity (Figure 6).

CL and EDS were captured simultaneously, allowing for perfect pixel correlation between the techniques. Elemental quantification was completed by EDS, while grain boundaries and trace elemental maps were identified using CL. This simultaneous capture presents a distinct advantage over utilization of either technique in isolation. EDS and CL data complement one another to give a more complete sample analysis, including elemental quantification and trace element information.