The Center for Nanoscience and Nanotechnology (C2N)

Material science is at the core of a large majority of research topics at the Centre for Nanoscience and Nanotechnology (C2N). Innovating in this field is of crucial importance. The Materials Department has two general objectives:

Understanding growth mechanisms and correlating the material properties with their growth conditions is one of the main challenges of the Department. To this aim, we use advanced equipment for growth and analysis. We also develop adapted theoretical and numerical tools. Our activities in material science focus mainly on nanostructures made of III-V semiconductors, Si/Ge, novel 2D materials (2D Materials team) and functional oxides (OXIDE team). Hybridization of these various materials is another challenge, opening the way to novel functionalities. These activities are pursued in strong interaction with photonics, nanoelectronics, devices, and systems.

In-situ growth in a transmission electron microscope of semiconductor nanostructures: Atomic Step Flow on a Nanofacet

The project Nanomax associates specialists (from the Ecole Polytechnique and C2N) in the epitaxial growth of nano-objects from the experimental and theoretical points of view.

The goal is to investigate fundamental issues of solid phase nucleation and growth (from a supersaturated vapor phase) that cannot be solved by ex situ observation (due to the evolution of nanostructures during post-growth cooling). The pilot project in NANOMAX is MBE of III-V semiconductor nanowires. Other investigations include chemical vapor deposition of various nano-objects ranging from semiconductor quantum dots to carbon nanotubes. NANOMAX is the first ever attempt to implement MBE in a TEM column. Moreover, its goal is real atomic resolution during growth, which has never been achieved so far. NANOMAX thus implies significant technical developments, regarding both hardware and software, such as the implementation of effusion cells in the vicinity of a modified objective lens and stage (http://www.tempos.fr).

A remarkable specificity of nanocrystals is the strong influence of their surfaces and edges on their properties. The important role of crystal boundaries also manifests itself at the growth stage. Indeed, surfaces influence the morphology and crystalline arrangement of nanostructures, not only as regards thermodynamics but also via their growth dynamics. This is notably illustrated in the vapor-liquid-solid (VLS) growth of semiconductor nanowires (NWs). In this method, vapor containing the NW constituents is supplied to a liquid catalyst nanoparticle. Upon supersaturation of the catalyst droplet, crystallization occurs: A nanocrystal forms, one of its facets in contact with the droplet. This nanofacet is where crystal growth further proceeds. A detailed and real-time observation of the liquid-solid interface is thus expected to clarify the role of the boundaries in the crystallization process. We observe the VLS growth of GaAs NWs in real time. We use a modified FEI environmental TEM equipped with an image aberration corrector. Two ports were designed to implement Ga and As4 molecular beam sources in the TEM. NW formation is catalyzed by Au particles dispersed on a heating carrier membrane, and in situ growth is performed by molecular beam epitaxy at 400 °C. At this temperature, the Au particles alloy with Ga to form liquid droplets. Upon As supersaturation of the droplets, GaAs NWs of hexagonal shape crystallize under the droplets. The boundaries of this system consist of the NW-catalyst interface, the NW sidewalls, and the surface of the liquid catalyst particle. We examine the formation of the WZ phase. The sidewalls of the NWs are {11-20} facets, and the hexagon sides are ⟨10-10⟩ directions. We first present an atomically resolved growth observation in a ⟨11-20⟩ zone axis. The electron beam is then parallel to the LS interface, and the atomic columns parallel to the beam produce a strong contrast.

Nevertheless, the observation conditions adopted in these studies, with the electron beam parallel to the LS interface, provide an incomplete picture of ML formation and progression. Here, we present in addition bird’s eye views of growing NWs which reveal essential complementary information. A two-dimensional projection of the growing ML is visualized, from the early stage of formation to ML completion. We confirm that WZ layers start from the periphery of the NW top facet, and we image, analyze, and model the progression of the step within this hexagonal perimeter. Relevant edge energies are extracted. This leads to a better understanding of the formation of the nanocrystal and ultimately to a better control of its structure. 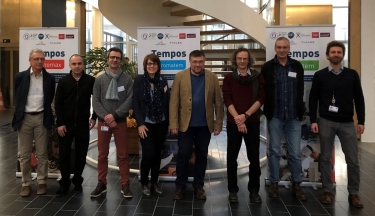 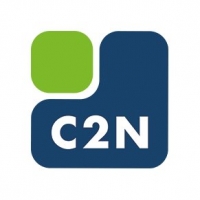