Visualization and measurement of electric and magnetic fields at the atomic scale are of vital importance in materials science development, as they directly impact the electronic properties and the materials applications (ex., In memory technology or optoelectronics). Differential phase contrast (DPC) imaging in Scanning transmission electron microscopy (STEM) allows examining fields present inside and outside a specimen with resolution only limited by the instrument capabilities.

Introduced by Dekkers and de Lang [N. H. Dekkers and H. de Lang, Optik 41, 452 (1974)], DPC relies on the displacement of the center-of-mass (COM) of the illumination intensity at the detector plane (also known as a convergent beam electron diffraction (CBED) pattern or a Ronchigram). This lateral shift is due to the electron probe momentum change induced by and negatively proportional to the local electric field. 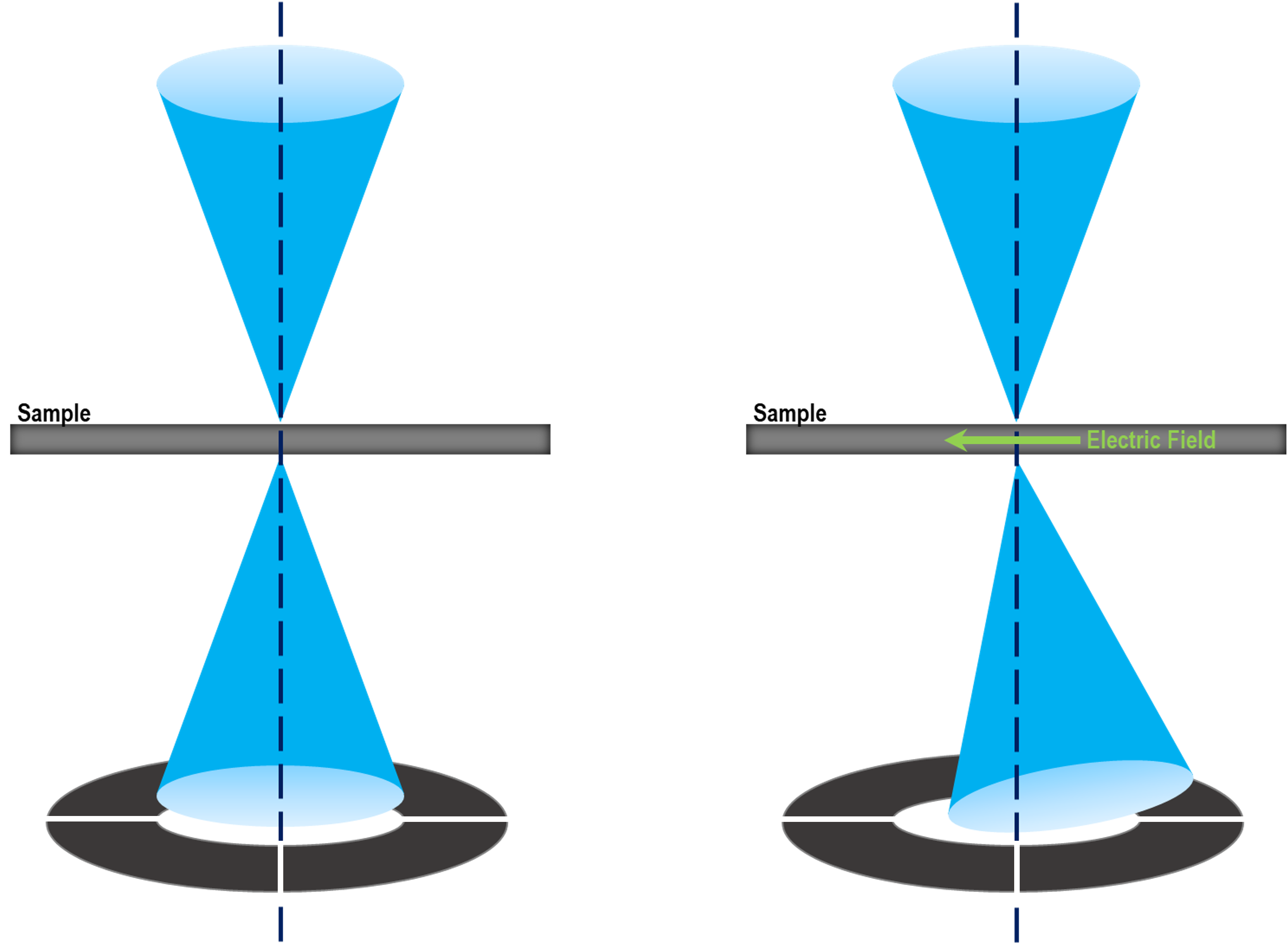 For non-magnetic samples, assuming small electric field variation through the beam path and minimal electron beam broadening as it passes through the specimen thickness, one can apply this linear relationship and use the measured beam shift to calculate the local electric field:

ΔPxy: change in the momentum of the electron beam, Exy: electric field, Δz: sample thickness, vz speed of electrons along the beam direction.

Conventional DPC imaging consisted of installation of physical segmented STEM detectors in an electron microscope and measuring the difference of intensity falling on the opposing segments to measure the beam shift (1977). In such a configuration, selecting the proper camera length to ensure enough signal falls onto each segment at each probe position is vital, and the changes in intensities within each segment are not captured, as each segment integrates the signal over its entire region. 4D STEM DPC overcomes these limitations by recording the entire diffraction pattern at each probe position. With the commercialization of aberration-corrected STEM and high-speed direct detection pixelated cameras, 4D STEM DPC imaging is now a popular method for atomic resolution electric field measurements in thin specimens. It can be done in DigitalMicrograph®, as shown in the flowchart below: 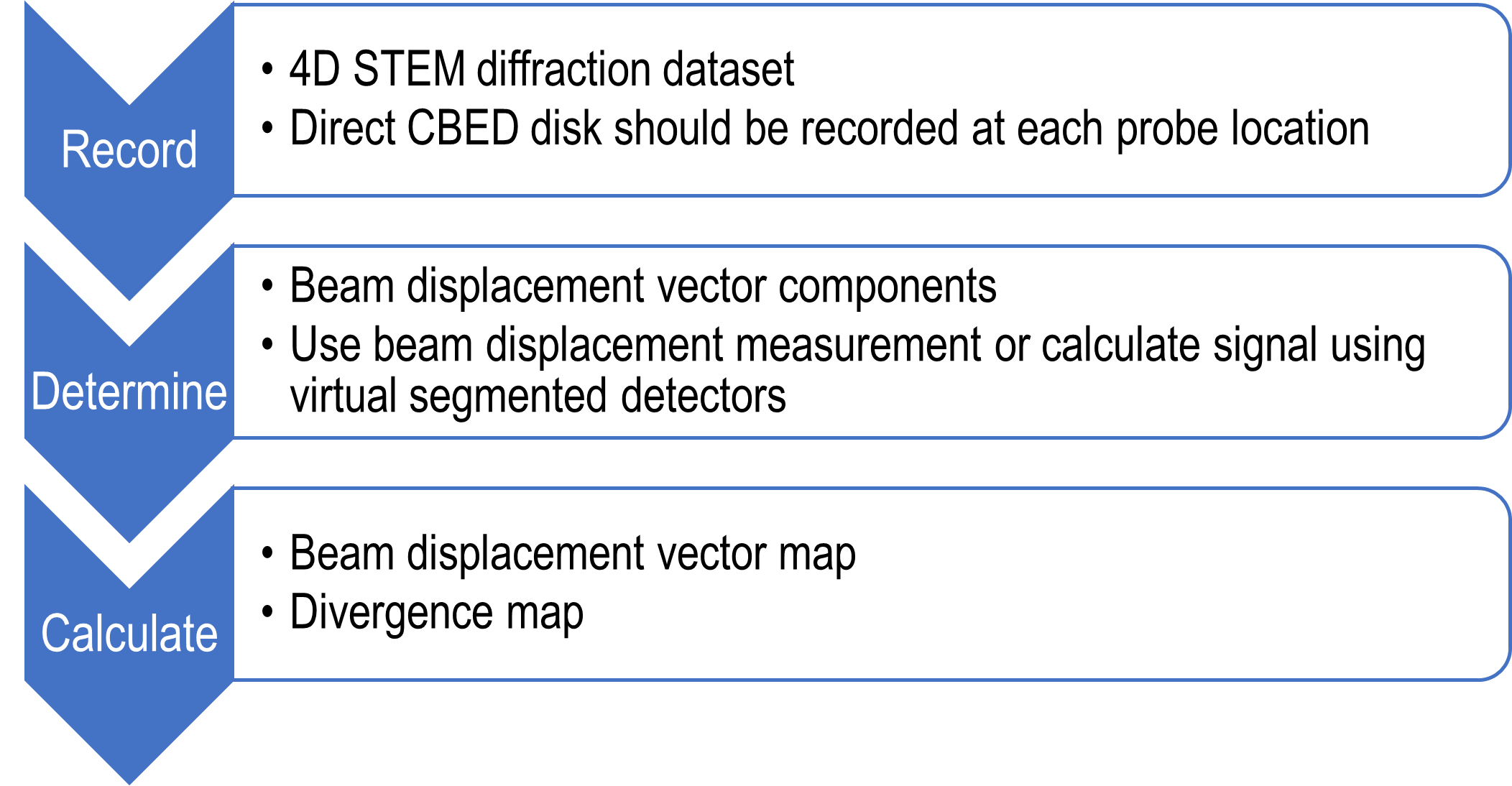 As with any electron microcopy technique, microscope setup and the specimen are critical for DPC electric field measurements. In this case, convergent beam electron diffraction (CBED) patterns are recorded at each STEM probe position, and then image processing is applied to measure the central beam shift in each pattern in the 4D STEM data cube to calculate the electric field.

Convergence angle: In an ideal case, the STEM probe should be significantly smaller than the scale of the electric field variation. Probe size (the spatial resolution) is determined by the convergence angle (condenser aperture and lens configurations). A larger convergence angle gives a smaller STEM probe (better spatial resolution) and vice versa. For atomic resolution DPC, the sample potential can be treated as linear when the probe size is smaller than the feature size. In this approximation, a phase proportional to the strength of the sample potential is measured, and the resulting diffraction is the original illumination disc uniformly shifted. If the probe size is larger than the feature to be measured, the DPC signal is caused by a shift and/or intensity redistribution in the original illumination. This signal includes information about short and long-range potentials and can be deconvoluted by applying frequency filtering.

Camera length: Select a camera length that allows you to record the full central beam in the CBED. A larger camera length spreads the disk over a larger number of pixels, resulting in less signal per camera pixel. Camera length should also be considered when selecting the convergence angle.

The sample data we use was provided by the researchers at the Molecular Foundry (Berkeley, CA, USA) and can be downloaded here. Energy-filtered 4D STEM diffraction data was collected at 300 kV, with a GIF Continuum® K3® IS system in electron counting mode, pixel size of 0.2 Å, and pixel dwell time of 0.00169 s.

DPC calculations in DigitalMicrograph are done on a 4D STEM diffraction data (CBED) using the Differential Phase Contrast technique and palette (screenshot below): 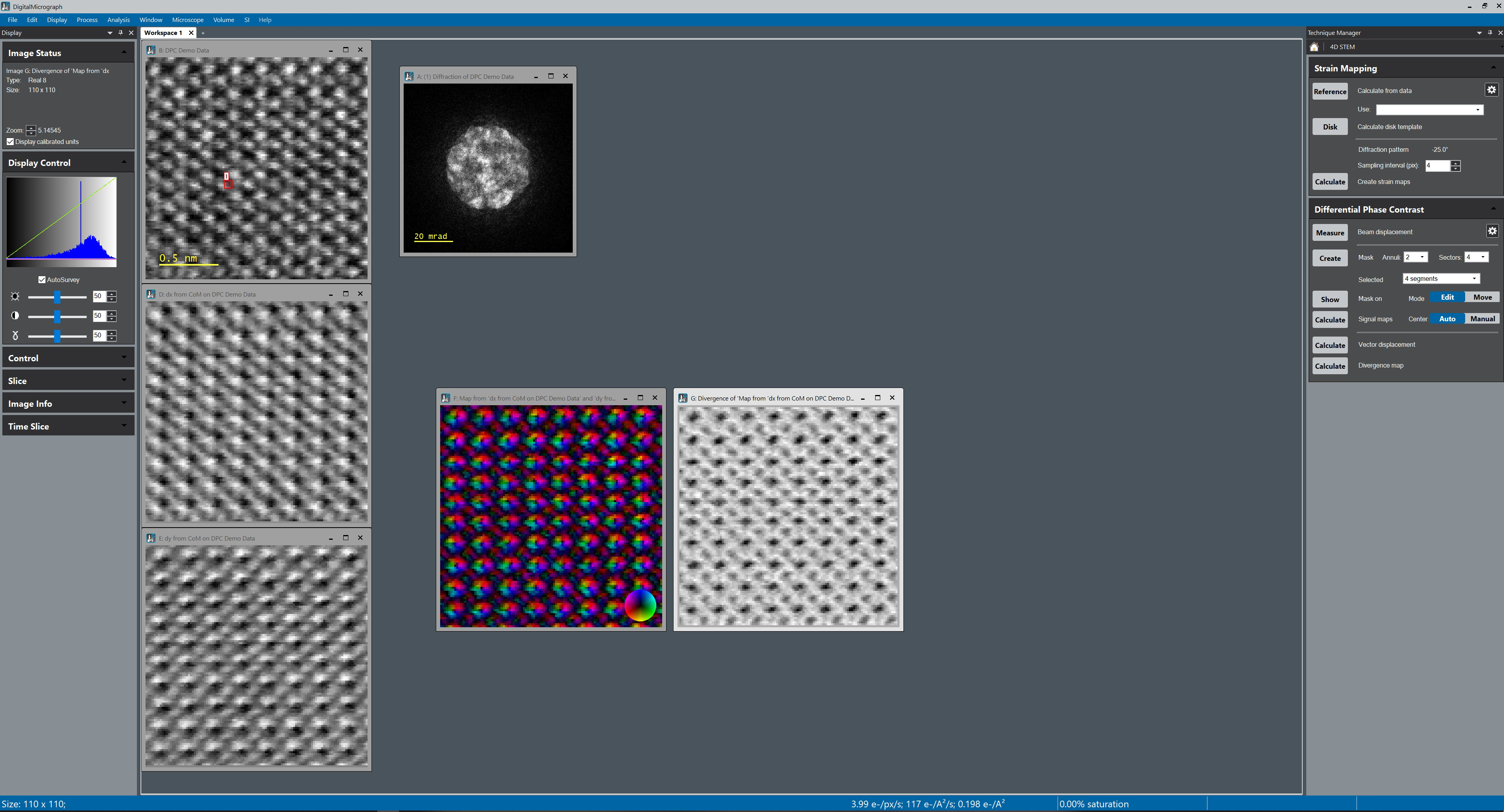