In problems involving real-world materials, the key to a solution often lies in using multiple complementary (and/or redundant) sources of information to discern and identify the various phases that might form during material production and processing. Of particular interest in this respect are unexpected and possibly undesired reaction products that can develop at interfaces between different components of an engineered structure. In such cases, it can be quite beneficial to simultaneously monitor both elemental composition (EDS fluorescence peaks and EELS core-edge signals) and electronic structure (energy-loss near edge structure or ELNES) signals to form a more complete picture of the interfacial phases present.

Gatan offers an array of products to enable this sort of concurrent multimode data acquisition on your analytical TEM/STEM system. Start with the STEMPack™ system, which provides multi-signal digital STEM imaging and spectrum-imaging. Add the EDS Acquisition option of our Gatan Microscopy Suite® (GMS) software to systematically capture fluorescent X-ray spectra from your existing EDS system. Then complete the system with either a GIF Tridiem® or Enfina electron energy-loss spectrometer to start acquiring simultaneous EDS, EELS, and ELNES data sets from your materials.

Read on for a detailed look at how STEMPack with EDS option and GIF Tridiem system were applied to the solution of a coating adhesion problem in a very practical and commercially important steel pipe material.

A case study: Identification of interfacial phases in coated steel via simultaneous STEM EDS, EELS, and ELNES with STEMPack/EDS and GIF Tridiem system

The sample investigated was a section of steel pipe with a multi-layer wear- and corrosion-resistant coating developed by Dr. Deepak Upadhyaya of Sub-One Technology (www.sub-one.com). An important physical parameter of this coating is its adhesion to the underlying steel. To achieve an understanding of the coating adhesion it was important to learn the nature of the phases that form at the steel-coating interface.

The figure below is a zero-loss filtered bright-field TEM image taken with a GIF Tridiem energy filter attached to a 200 kV TEM/STEM instrument with LaB6 electron source. The image shows the interfacial region of interest, as captured in a FIB-prepared cross-section specimen. This result already hints at the presence of an interfacial phase due to the subtle contrast change in the steel within roughly 20 nm of coating layer onset. 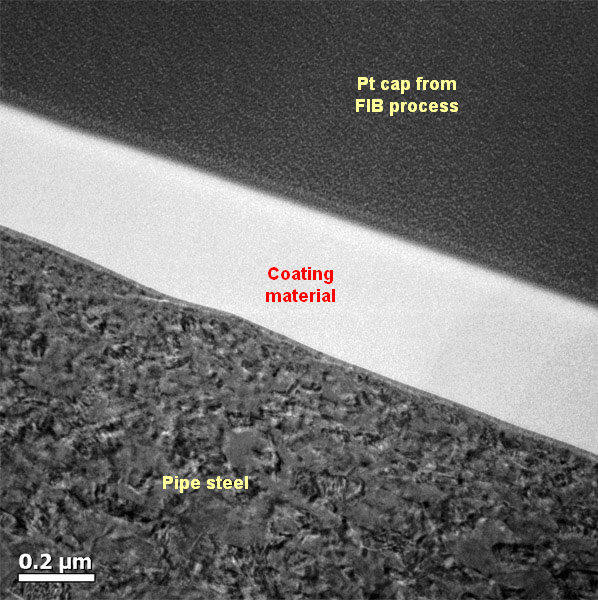 Before proceeding with STEM analysis of this sample region, a quick map of the relative specimen thickness (in units of lambda, the material-dependent mean free path for inelastic scattering) was taken to confirm that it would yield usable EELS data. As shown below, the resulting thickness map, captured and extracted in less than 10 seconds, showed that this FIB sample was of an ideal thickness for EELS. 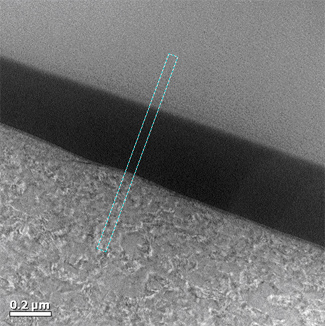 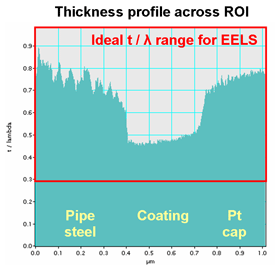 Next, the system was switched to STEM mode with 3 nm probe and the GIF Tridiem system set for EELS spectrum acquisition. Using the STEMPack system interfaced to a HAADF STEM detector, the following digital Z-contrast image of the interface region was captured: 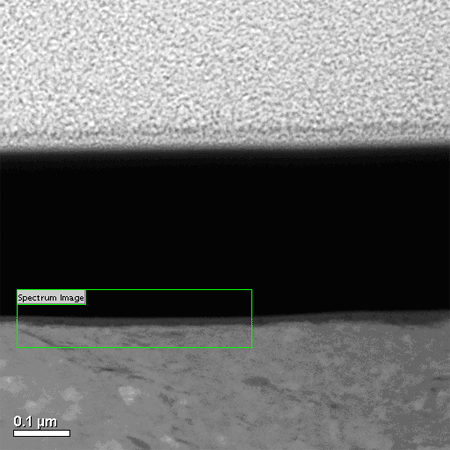 In Z-contrast mode, specimen areas of higher average atomic number (Z) appear brighter than those of lower average Z. The 20 nm interfacial layer is now readily apparent and clearly has a lower average Z than the underlying steel (since it has a darker contrast level than the steel). This HAADF STEM image then became the reference point for setup of a systematic STEM spectrum image (STEM SI) acquisition with simultaneous EELS and EDS spectra.

The spectrum image area highlighted in the above figure was sampled as an array of 160 x 40 points with 2.7 nm spacing, thus yielding 6400 pairs of EELS and EDS spectra (one pair at each sample point). The acquisition time per pixel was 0.5 s. The EELS acquisition was configured to capture the energy-loss range from 50 to 1050 eV with collection angle of about 17 mR and convergence angle 10 mR, while the EDS acquisition was set up to cover X-ray energies from 0.2 to 20 keV. A scan through the resultant data set, integrated laterally over 90 sample points parallel to the interface is shown in the movie below. 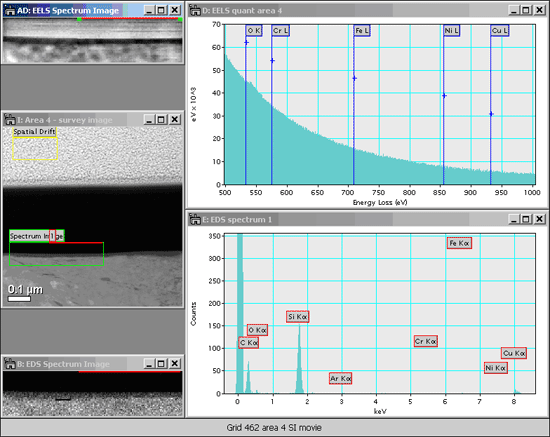 There are several advantages to systematically collecting large numbers of spectra in such spectrum image data sets, as opposed to a few brief point analyses. One major advantage is the unbiased and redundant nature of the sampling, allowing immediate and direct confirmation that spectral features are real and reproducible, not spurious.

Another major benefit is the fact that both spatial and spectral information is permanently recorded. This allows one to effectively play back the experiment in subsequent off-line data processing sessions free of the constraints of the TEM lab. In this way, the results may be examined in greater detail to reveal previously unexpected and unnoticed specimen components. The concomitant capture of spatial and spectral information also makes subsequent correlation of elemental composition with specific sample areas entirely unambiguous and robust, particularly in the extraction and precise spatial registration of elemental composition maps.

Finally, another key advantage of spectrum image acquisition is the distribution of dose, both with respect to specimen damage and the accumulation of carbon contamination, a common problem in STEM-based point analysis. One can thus harvest artifact-free spectra with high total counts (and low statistical noise) by summing spectra over selected homogeneous sample regions (as done in the above line-scan movie across the interface).

Viewing the animated line scan above makes it very clear that the specimen composition goes through abrupt changes in the vicinity of the interface. As anticipated by the EFTEM and Z-contrast images, the 20 nm layer between the steel and overlying coating clearly has a distinct composition with relatively high oxygen content, as might be expected for a surface oxide layer on the steel. However, a closer examination of the line scan movie at slower frame rate reveals the presence of relatively high oxygen content in a thin layer immediately above the oxidized steel. Such observations made during off-line exploration of the SI data set help guide subsequent sub-sampling of the data set for in-depth quantitative analysis.

In the case of this particular interface structure, four representative sample layers were identified and selected for quantitative EELS and EDS analysis, as illustrated below.

In the above, regions of interest (ROIs) 1 and 4 are representative of the bulk of the coating material and the steel, respectively. ROI 3 represents the readily apparent 20 nm interfacial layer associated with the steel, and ROI 2 isolates the very thin layer just above this 20 nm layer and apparently associated with the coating. Cumulative EELS and EDS spectra extracted from these regions are shown below, along with approximate atomic ratios quantitatively extracted from the spectra using the EELS and EDS analysis components of the GMS software.

The above set of spectral displays focuses on the lower Z element signals, including C, O, Si, and Ar. The second set below highlights the transition metal signals along with oxygen. Although these are two separate views on the data, keep in mind that all these signals were captured simultaneously during each pixel dwell in the course of the spectrum image acquisition.

The complementary nature of EELS and EDS elemental signals and the value of having both available in STEM spectrum imaging are clearly illustrated by the above spectra. In the EELS energy-loss range probed, accurate extraction and quantification of the Si L edge signal is problematic, but the Si K signal in EDS is easily captured and quantified. In the EDS data, oxygen quantification becomes difficult when transition metals Ti, V, Cr, or Mn are present, but the EELS results above show clear separation and reasonable quantification of the O and Cr signals. Due to the secondary and fluorescent nature of EDS signals, spurious Cu peaks from the support grid or TEM system components are common problem, as seen in the EDS data above. EELS measures primary events captured in the direct beam and is free of such artifact signals, as clearly demonstrated by the absence of a visible Cu signal in any of the above EELS spectra.

Taken together, the key finding of the above data sets is that ROI 2 is an oxide layer that does not involve any of the metals from the underlying steel pipe material. It is quite distinct from the obvious native oxide layer in ROI 3 on the surface of the steel and appears to be dominantly an oxide of silicon.

Further evidence in favor of this conclusion comes from a detailed look at the EELS data in the vicinity of the oxygen K edge, the so-called energy-loss near edge structure (ELNES). ELNES reflects the unoccupied density of states in the electronic band structure of a material. This varies with the electron configuration and bonding associated with a given atom type and is thus another probe that can be used to differentiate chemical phases in a sample. The inherent eV-level (or better) resolution of EELS spectra acquired with Gatan EELS spectrometers mounted to present-day analytical TEM systems, means that ELNES signals are immediately and simultaneously available in virtually any routine EELS acquisition. No additional effort is required to harvest this information. One need only take a close look at it once the data sets have been acquired.

The spectra below show the O K ELNES for the two distinct interfacial oxide layers proposed for ROI 2 and ROI 3.

The O K edge in the steel oxide has an additional threshold feature just below the onset energy that the coating-associated oxide does not. This is consistent with O K edges measured from Fe2O3 and SiO2 reference materials, as shown below.

The case study reviewed above demonstrates that simultaneous capture of multiple analytical TEM signals enable one to form a robust and consistent picture of the construction and composition of important material structures at the nanometer scale. For the particular material studied here, the detection and identification of two clearly distinct interfacial oxide phases on either side of the steel-coating interface was a key finding about the nature of the adhesion between coating and steel. These results led Sub-One Technology, the manufacturer of the coated pipe, to make refinements to their process and thereby improve the adhesion of the coating by 150%, a significant positive result for a practical, real-world material.